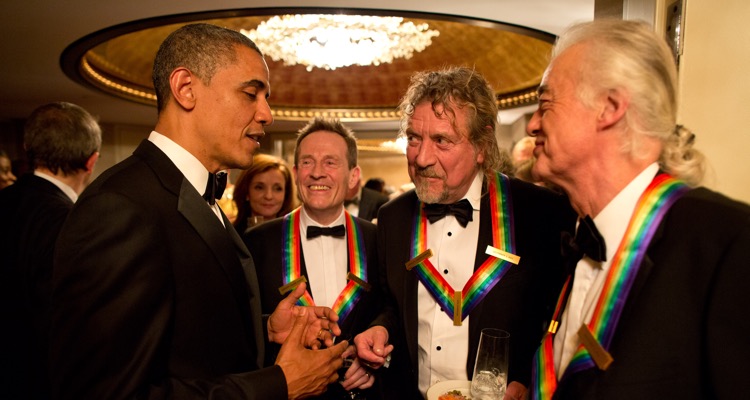 Dec. 12, 2012 "When I was in high school, I had a friend who had Bose 901 speakers–at the time the best speakers on the planet–and when his parents were gone, he would invite me and other friends over to blast Led Zeppelin songs so loud that the windows in the almost rattled. So when the President was chatting with the surviving members of Led Zeppelin–John Paul Jones, Robert Plant and Jimmy Page–during intermission at the Kennedy Center Honors, those long ago memories came flooding back." (Official White House Photo by Pete Souza) This official White House photograph is being made available only for publication by news organizations and/or for personal use printing by the subject(s) of the photograph. The photograph may not be manipulated in any way and may not be used in commercial or political materials, advertisements, emails, products, promotions that in any way suggests approval or endorsement of the President, the First Family, or the White House.

The United States District Court for the Central District of California has now released paperwork memorializing a lopsided decision in favor of Led Zeppelin.  An 8-person jury slammed the trust for Randy California of the band Spirit and plaintiff Michael Skidmore, arguing that little evidence existed for the plagiarism alleged.

That means no compensation whatsoever to the plaintiffs or band, including any legal costs.  More importantly, the case will likely cool further copyright challenges, including ‘trolling’ cases with flimsy accusations.

Here’s the decision, officially release by the court early this morning. 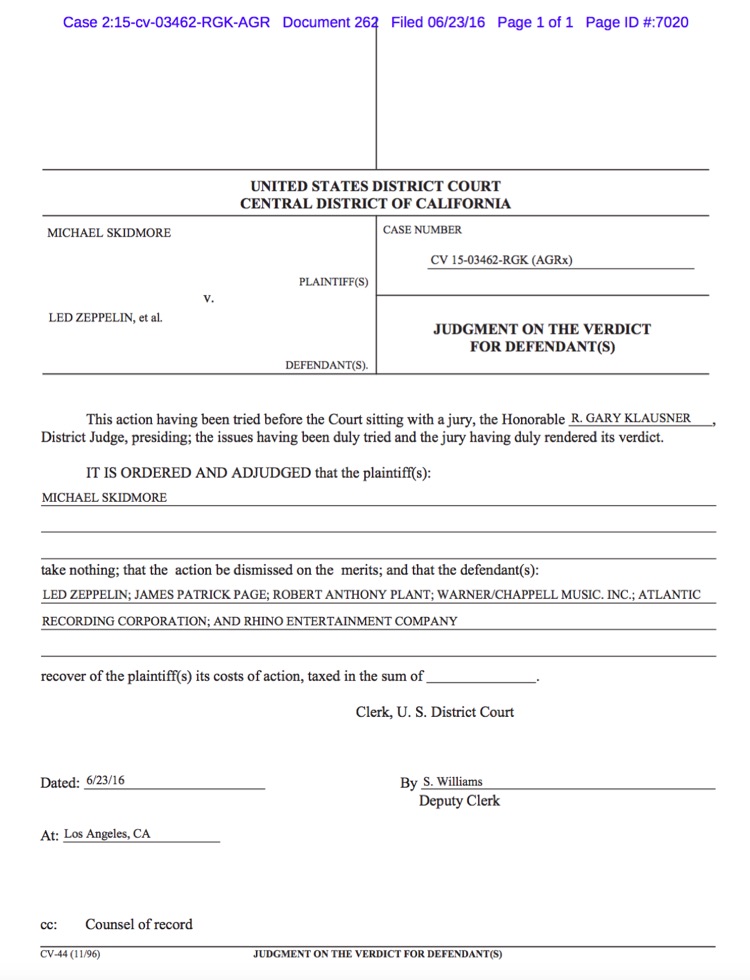 The jury questionnaire has also been released, though we’re not clear if this is the final version.  Many of the questions provided to the jury were left unanswered, leaving the possibility that a partial document (or the incorrect version) was filed with the court.  Most importantly, the jury did agree that the band was aware of Spirit and their song, ‘Taurus,’ but that they didn’t copy the work to create ‘Stairway to Heaven’.

Exactly why they felt that way is not specified, though it’s likely that repeated testimony about the presence of earlier, public domain works played a critical role in swaying the opinion.  That probably includes a piece dating back to the 1600s, a baroque work first published on Digital Music News and a possible trial killer for Skidmore and Spirit (more details on that piece, including a clip of its performance, can be found here.)

Other versions containing the exact same riff also surfaced, including everything from public domain folk songs to 1950s BBC performances.  In the end, ‘Stairway’ was deemed a rework of a timeless riff, and not a rip-off as originally alleged.

There may be an update to this jury filing by the court, but for now, here’s what’s now in the docket.

Listen to “Never Will” by John William Thompson